Playboy photo booth we provided (Playboy TV Photo Booth) for the launch of The Bridget & Wednesday Friday Show Comes to Sirius. Bridget is one of Hugh Hefner’s girlfriends and the star of the hit show. The show is  “The Girls Next Door” on the E! Network. She loves anything old school so when she head we could provide a classic vintage photo booth she had to have it at her launch party! 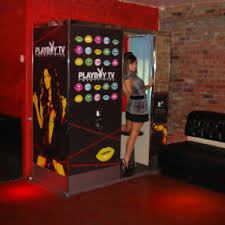 So the Playboy Radio channel (198) debuted a new show staring Hugh Hefner’s girlfriend and co-star of the popular television show “The Girls Next Door,” Bridget Marquardt.

The show titled “The Bridget & Wednesday Friday Show” is set to air live every Friday morning and will feature “Bridget’s insider tales of life at the Playboy Mansion as well as her adventures with Hef, Holly and Kendra”…sounds juicy. If you are wondering who “Wednesday” is, he is her Pekingese. You read that right, Bridget’s dog will be the co-host on the show. I’d love to just make a mockery of this whole idea but, the fact that Bridget has her Master’s degree in Communications gives her enough credibility that I will have to at least listen before I judge.

The Playboy TV Photo Booth was an absolute hit with everyone! Thanks for the invite Playboy! We had a great time!