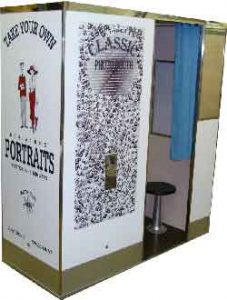 White photo booth for Super Saturday Fundraising with white booth for  Ovarian Cancer Research Fund’s event in Hampton. It was hosted by Kelly Ripa and Donna Karan.  Raised an impressive $3.5 million for ovarian cancer research on Saturday in July 26. The location was at Nova’s Ark Project in Water Mill, NY. Classic booth LLC  provided  the vintage non digital photo booth for Super Saturday Fundraising. Also we proud to say that our photo booth was very popular at the event. The high-profile Hamptons fundraiser, sponsored by QVC. It was a luxury shopping and family activity event. Also that boasts a one-of-a-kind designer garage sale. As well as kids’ carnival, luxury raffle and gourmet food. Therefore raising the funds for ovarian cancer research. Guests are able to shop the fashion garage sale.

Which includes merchandise from over 200 major designers. As always, the event’s red carpet was a success with celebrities. On the carpet, the “Live With Kelly & Michael”. Co-host spoke about her dedication to the cause and said she became an avid supporter of ovarian cancer research.  She also dished to Hamptons.com about a recent birthday extravaganza. This past Friday, Ripa and husband, Mark Consuelos, attended Jennifer Lopez‘s 45th birthday. The event was at the private garden at Nammos Restaurant. Attendees stopped by one of the many attractions when they need a brake. Such as hair styling at Priv’s Braid Bar, psychic readings and the photo booth station. As well as  “Designers A to Zoe” booth treated  the shoppers with the there product.  The children’s area at super saturday was a hit with celeb moms and dads. Kids have carnival and lunch provided by Sant Ambroeus.

Also last year  Super Saturday raised $3.5 million. Read last year’s recap here. First of all his year’s Fundraising event was packed with Hamptonites. As well as  A-Listers on July 27.  But, in the midst of all the celebrity action, the event raised an incredible $3.5 million. East End fashionistas, Super Saturday’s ultra-luxury designer “garage sale” was a major hit this year.  As well as  a result guests scoured the sale for sought-after fashion finds by over 200 top designers.  Live, on-site broadcast, offering viewers the chance to get in on the Super Saturday action.